At the core of Tableau is data - your data. Your data can come in different formats and structures, categorized at varying levels of detail, and can have relationships with other data. This is the kind of metadata that you can expect to surface from the Metadata API using GraphQL.

In order to successfully create effective GraphQL queries, you need to understand how Tableau interprets and interacts with content and assets. Understanding this can inform the most efficient way for you to access metadata at the level of detail that you need.

Because the Metadata API uses GraphQL, this section describes the fundamental objects that are available to you to use in a GraphQL query.

Tableau content that can only be managed through Tableau Online or Tableau Server includes the following:

Note: Some content listed above can be managed through the Tableau REST API as well.

The Metadata API treats information about any data that comes from outside of the Tableau environment as external assets. External assets include the following:

Note: Cubes are not supported.

Objects and their roles

The GraphQL schema used by the Metadata API organizes content and assets on Tableau Online and Tableau Server by grouping them by object and role. These objects and their roles are the foundation to your GraphQL queries.

The GraphQL schema defines the parent/child object relationship by what the objects can own or contain. In other words, an object is a parent object when it functions as a container for other (child) objects.

Parallel to parent/child object role and relationship, the GraphQL schema organizes objects by object type and the attributes that it can inherit from the object.

Examples of object types and their inherited attributes

The table below captures example objects, object types (interface), and their common and unique attributes and properties.

The Metadata API enables you to see relationships between the content and asset that you’re evaluating with other items on your Tableau Online site or Tableau Server. These items include the following:

You can quickly access this type of information by using shortcut objects defined in the GraphQL schema. These lineage or relationship objects use the upstream or downstream prefix. For example, you can use upstreamTablesConnection to query the tables used by a data source, use downstreamSheetsConnection to query sheets used by a workbook, or upstreamLinkedFlows and downstreamLinkedFlows to query flows that are directly upstream or downstream of one another.

For an example query that uses lineage shortcut, see Filtering section in the Example Queries topic. For more information about linked flows, see Working with linked flow objects below.

The Metadata API enables you to traverse through relationships within the data that you’re querying using pagination. The GraphQL schema defines pagination objects as those objects that use the Connection suffix. For example, you can use the databasesConnection to get a list of paginated results of database assets on your Tableau Online site or Tableau Server.

For an example query that uses pagination, see Pagination section in the Example Queries topic.

For an example query that uses the description inheritance object, see Inheritance section in the Examples Queries topic.

To see how the metadata model used by the Metadata API works, review the following example scenarios. 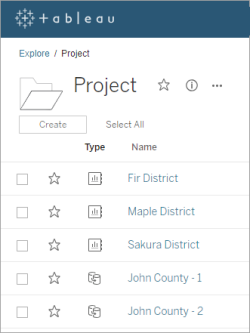 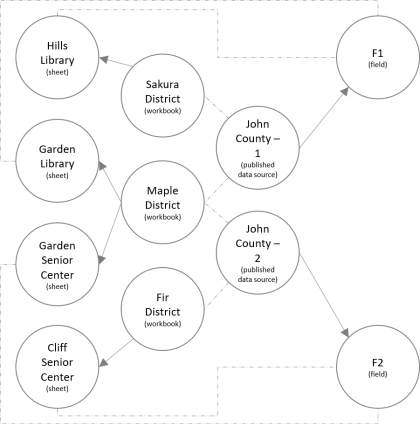 In this scenario, you might want to know what could happen if the published data source, John County - 1, is deleted. 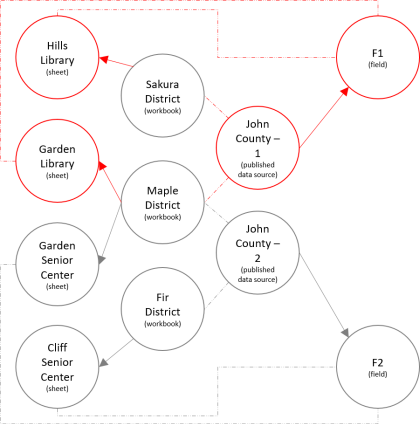 In this scenario, you might want to know where a data point from a sheet object, Garden Senior Center, in a workbook object, Maple District, is coming from.

Based on what you know from the metadata model, attributes are inherited from the parent object . Therefore, if you start from Garden Senior Center sheet object, you can move to the referring field object, F2, to see that it’s owned by a published data source object. In this case, John County - 2 is the source for the data point. 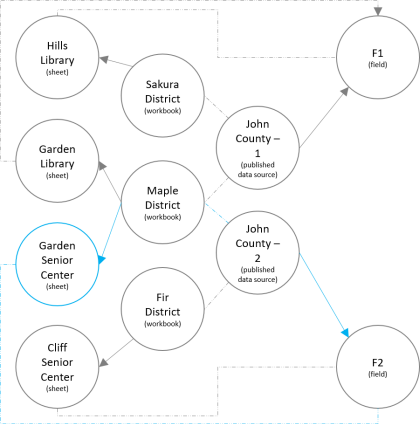 During this analysis, you are able to freely include or exclude parts of the metadata model in order to understand the lineage flow for Garden Senior Center. For example, you can choose to exclude Garden Library sheet object even though it’s also owned by the same workbook object, Maple District.

Additional notes about the metadata model

When custom SQL queries are defined in your data source or flow, the queries have to fit a set of criteria to be recognized and interpreted by the Metadata API. For more information, see Tableau Catalog support for custom SQL in the Tableau Help.

Using the databaseTable object in a query

When you run a query using the databaseTable object, for some databases, the schema attribute might not return the correct schema name for the table. This issue can occur when the selected schema, while creating or editing a data source, workbook, or flow, is changed after adding the table.

When the selected schema changes after adding the table, the schema attribute your query returns is the name of the last selected schema instead of the actual schema that the table is using.

Databases that might return the incorrect schema in the scenario described above include Amazon Athena and Exasol.

When you run a lineage query to determine upstream databases (D1 and D2) from a workbook (WB), only the databases (D1) whose fields (F1) are used in a workbook’s sheet (S) are returned. Databases (D2) that might be referenced by the workbook, but whose fields aren’t used by a sheet directly, won’t show as upstream. 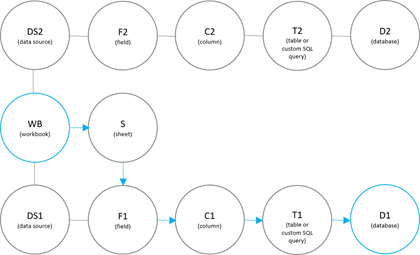 For example, suppose you have permissions to see WorkbookA. You run the following tags query, which uses the asset attribute to return all objects that use tags.

In this example, the query returns two workbooks with its results obfuscated.

Because results are always obfuscated when you use the asset attribute in a tags query, you can modify the query to be type specific to return the results you expect. In this example, you can run a query using the workbook type instead.

When you modify the tags query to be type specific, the query returns the tags metadata for WorkbookA.

For example, suppose you have a flow called Superstore. You can run the following query to compare the information returned for the flows upstream of the Superstore flow.

The above query returns the following information.